The Collectors’ Conclave was conceived as an event to honor what collectors do for society in preserving and protecting the artifacts of our culture.

The event at the Sportsmen’s Lodge in Los Angeles on November 30, 2014, more than met that goal. Among the interesting collections on display were:

Russian Handcrafts — An array of the best of Russian lacquered boxes, matrioshkas, brooches, toys, icons, and other items.

Magic Puppets — A collection of some 22 pre-war Czech action figure dolls that were stored and subsequently recovered by a family member of the original owners.

Fascination of Ivory — A display of various items made from or with a variety of ivory sources — tools, accessories, jewelry, statues — for artistic, decorative, scientific, and practical purposes.

A Parliament of Owls — A collection of all things owls — from a number of Victorian stuffed owls to paintings, souvenirs, and decorations featuring owls.

Fountain Pens — A display of historic and specialized pens used in the 19th and 20th century to sign famous and mundane documents.

Miniature Wurlitzers — Miniatures and ad specialty replicas of the jukeboxes and other music machines of the 1930s and 1940s. 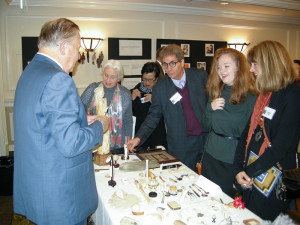 The second objective of the Conclave was to raise funds to benefit the research work of the Ivory Education Institute in its effort to find new, non-invasive, non-destructive, reliable, consistent, and inexpensive ways to differentiate types and ages of ivory. While the cost of promoting and mounting the Conclave was happily covered by ticket sales, exhibit table rentals, and supportive donations, no extra income for pending experiments materialized from the event.

The banquet was a stylized version of eating dinner while watching the evening news on television. Some seven talks were presented while the 60 or so guests enjoyed a French salad, chicken wellington or vegetarian lasagna, and apple tart. After Rabbi Jerry Cutler warmed up the crowd with a few amusing stories, the presentations began:

While nearly everybody was highly praiseworthy of the event — calling the evening interesting, enjoyable, noteworthy and remarking that the arrangements were “superb,” the experience “moving”, and some of the presentations “passionate” — we saw a number of ways to improve it in the future. We would seek a media co-sponsor for the event to give it more reach and reduce the number of speeches from the podium to allow people at the tables to talk among themselves. We had hoped for a two-way dialogue between speakers and audience, but no questions emerged. The Master of Ceremonies could have been much more forceful in encouraging the dialogue. We also envisage a lead-up event to give any future Conclave more exposure. This is how we are describing the idea to a member of the Los Angeles Unified School District Board:

What if the School District were to join with the Los Angeles County Art Museum in sponsoring a COLLECTION EXHIBITION — an eclectic display of the collections of school age kids with a qualifying event to weed out duplications and to encourage excellence — one Saturday at the beginning of the next school year? That would suggest that collecting is a worthwhile hands-on activity for kids, reinforce LACMA as a possible beneficiary for other collections, and perhaps spark more Museum memberships if displaying at the COLLECTION EXHIBITION were linked to a membership program. It could also emphasize the fact that schools as community-building institutions — facilities that are central to neighborhoods, the source of lifelong friendships and connections, and much more than a highly evolved knowledge and skills delivery system. Collecting is clearly a worthwhile societal undertaking and kids are losing the urge and passion to collect in the face of the time demands of the Internet. Perhaps the COLLECTION EXHIBITION would reverse that trend. 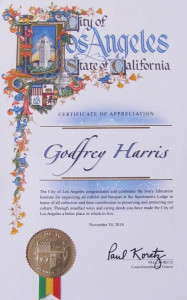 Finally, we were very proud that both the City of Los Angeles and the County of Los Angeles issued illustrated proclamations in honor of the Collectors’ Conclave. The City’s Certificate of Appreciation signed by Councilman Paul Koretz congratulated Godfrey Harris and the Ivory Education Institute for organizing the exhibit and banquet and said that the Institute “has made the City of Los Angeles a better place in which to live.” The County’s Commendation, approved by Supervisor Michael Antonovich who came to the Conclave to see the exhibits, was in recognition of Godfrey Harris and the Conclave for “dedicated service to the affairs of the community and for …numerous contributions for the benefit of all the citizens of Los Angeles County.“ 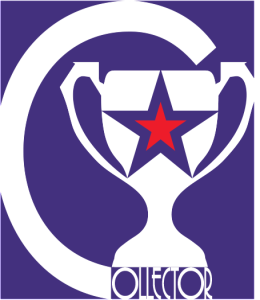