A Practical Solution to the Issue

As Published in Perspective

LOS ANGELES — The Federal government’s recent effort to ban the sale and movement of objects made from or with ivory has gone quiet for the moment, perhaps in the face of the 2014 political changes in Congress. But the election results certainly haven’t slowed any of the animal rights groups from their concerted effort to demonize ivory.

These groups have simply shifted their disdain for this historic material to state capitals and major cities claiming that the country is swimming in illegal ivory. For proof, one group asked investigators to identify ivory for retail sale that “might possibly” have been worked after 1977. That could literally mean everything they saw since “might possibly” is a lot different than “was probably.” While Virginia has just refused to become involved, California, Washington, Connecticut, Hawaii, Iowa, and Kansas as well as San Francisco and now Los Angeles are being asked to pass anti-ivory legislation contrary to the interests of millions of Americans and thousands of institutions that own ivory objects.

The 2014 Federal effort to convince the world that possessing one of its most precious materials is evil was met with strong opposition from museums, musicians, artisans, antique dealers, appraisers, auctioneers, collectors, hunters, academics, and many ordinary citizens who treasure or use objects containing ivory.

The Federal government’s approach to stopping elephant poaching seemed flawed from the outset: 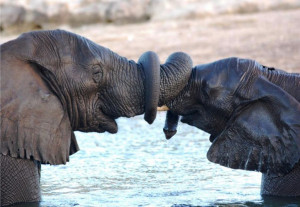 Only someone who hasn’t been paying attention would miss the answer to these questions. It is MONEY! Insisting on ending the trade and movement of ivory objects to save elephants and stop terrorism raises large amounts from sympathetic donors. It doesn’t much matter whether the picture is of a bull elephant taken down for its tusks or a film of two young calves playing in the mud, elephants generate enormous interest, sympathy and smiles that translate into large contributions.

The more money that elephants can raise for animal rights groups, of course, the more powerful their leaders become in the scheme of governance. They are able to entertain lavishly, travel extensively and underwrite research generously and they can conduct surveys, buy ads and produce documentaries to raise even more money. But most of all they can pay themselves impressive salaries and make eye-opening contributions to support the reelection of like-minded politicians under the protection of the Supreme Court’s Citizens United decision.

What a combination: Admired wild animals threatened by greedy, uncaring humans are saved by the concern of government leaders across the country. Impressive, but basically a fraud. Elephant numbers have been diminishing in certain parts of Africa, but not in others — and where the numbers are going down, the causes are not solely East Asian demand for ivory. While elephant herds have clearly suffered from the activities of poachers serving criminal gangs in the northern areas of central Africa, that isn’t the full story of the cause of the reduction in some herds.

But animal rights advocates, who live in big Western cities and often are unaware of human factors on the ground in Africa, have been convinced to view any ivory market as an incentive for poachers. They point to how a 2008 one-time sale of tusks only whetted appetites for more ivory in an insatiable wave of demand. Not true. The evidence from reputable researchers indicates that the one time sale was absorbed by speculators betting on a lack of a consistent future supply and that fear pushed the price of the remaining available ivory up, in turn increasing the incentive for poachers to do their evil. It is still going on. As long as people believe that they can repeal the laws of supply and demand, illegal activities and a black market will flourish.

Most of us don’t have to go too deeply into history to see other examples of the wishful thinking of naive do-gooders turned into expensive, failed government policy.

The solution to the ivory question is rooted in managing demand rather than in trying to end supply. Specialists in ivory believe that if a consistent, controlled ivory marketplace were established and properly managed— using tusks in storage, tusks from animals that die of natural causes as well as culling practices, and ivory that has been recycled — it would allow for managed conservation techniques, establish a stable pricing mechanism to satisfy demand, and allow for ivory to be used for many of its historic purposes.

The notion that American consumption of ivory products stimulates Asian demand is a myth perpetrated by animal extremists abetted by zealous public relations firms. Where is their evidence? There is, in fact, no measurable U.S. demand for ivory objects from newly harvested tusks. State and city legislators should not buy into the kind of wooly thinking or wobbly reasoning being advanced by animal rights advocates.

They are in the game of manipulating elected officials to raise MONEY for their
organizations, not to save elephants in Africa. If they were serious about the latter effort, they
would stop using scare tactics, spreading false statistics, and offering half-truths, and start
spending more of their huge resources on Africa’s real conservation needs.

About Perspective:
Perspective — Understanding the News in Context,  is a periodical publication of Ivory Education Institute. The above article was published in the Vol. 2, No.1 issue on February 10, 2015.