SURPRISINGLY, ONE OF LIFE’S TEACHABLE MOMENTS

Authorities in Kenya set some 15 tons of ivory tusks on fire to show fidelity to World Wildlife Day on March 3rd. As the caption of the picture below that appeared in the next day’s issue of The New York Times noted:

“The event was intended to discourage poaching and illegal ivory trading.” 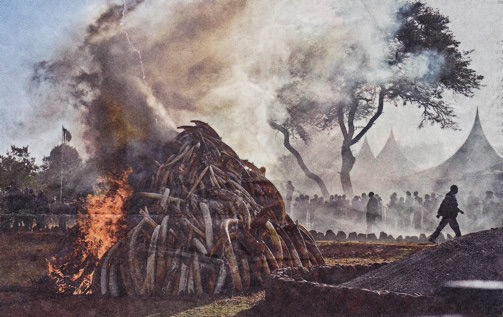 OK, but how many of the tusks burned that day had nothing to do with poaching because they came from animals that had died of natural causes?

While many of us would question whether an ivory bonfire could have any beneficial effects, it turns out that ivory is highly resistant to this kind of insult. According to Dr. Adolf P. Shvedchikov — the scientist leading the Ivory Education Institute’s effort to find an inexpensive, quick and non-invasive way to determine the type and age of ivory specimens — only about 20% of an elephant’s tusk is organic. That can burn. The rest of the tusk is composed of a mineral called hydroxyapatite [Ca10(PO4)6(OH)2]. While the organic component of a tusk might burn at 300° C with the help of an accelerant, the mineral portion can only decay in temperatures approaching 1000°C — a level of heat that is not easy to obtain.

The Kenyan fire was intended as a great public relations triumph for the animal rights groups. It turns out, however, to be a teachable moment for those who find the current attempts to ban all trade and movement of objects made from or with ivory forlorn. The very fact that the tusks could not be reduced to ash in an outdoor bonfire is one of the reasons why ivory has proven so valuable to cultures around the world. Because of its resistance to fire and decay, it has long been an important repository of historical data, practical uses, and artistic styles. That value should not be denied to our society or to any other on earth. There are ways to protect elephants and maintain a sound trade in tusks if those in authority would only begin to think instead of simply rearranging their prejudices.

About Godfrey Harris:
Godfrey Harris heads a public policy consulting firm in Los Angeles and is principal representative of the Political Action Network of the International Ivory Society.